Excellent condition as you can see by the pics.
This amp was bought as a collectable and thus seldom played.
Sounds great at any volume, this is just a really cool, well made amp.
Comes as pictured with footswitch for the tremolo.
Specs:

1950s-era Deluxe and Tremolux amps are prized for the warm, rich compressed tones of blues and early rock ‘n’ roll. Clapton often uses a Deluxe when playing traditional blues, and Fender has answered his call for a special model with several distinctive features by introducing the EC Tremolux amp. Built to Clapton’s own exacting specifications and handmade in the United States, it’s a fascinating variation on the ’57 Deluxe designed with a ’50s-era output tube bias tremolo (which produced a more throbbing pulse than later Fender tremolo circuits) and a switchable power attenuator (reduces speaker output). A pinnacle of personally inspired amp tone for stage and studio alike, it’s a must for Clapton fans and guitarists who want the ultimate in tube performance.

A special model with several distinctive features including a fixed bias for increased headroom. 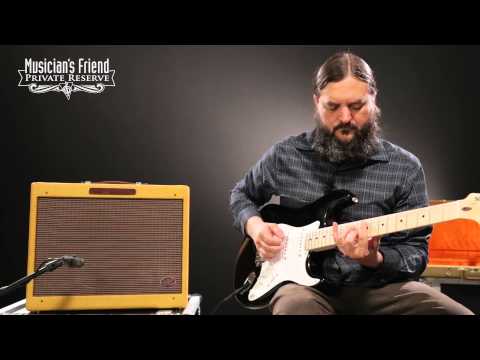