Capturing both the Dual and Triple Rectifier tones in one rackmount unit.

These are a great unit and very easy to get killer tones out of. Whether you are building a home studio or putting together a rack-rig, this preamp is a great basis for your sound.

This one is in very nice condition and sounds great.

Mesa has discontinued these amps, so grab one while you can.

FOR THREE YEARS WE WORKED DAY AND NIGHT TO DELIVER THE SOUND AND FEEL OF OUR LEGENDARY DUAL AND TRIPLE RECTIFIER® STACKS …DIRECT TO TAPE.

Over the years we have watched a digital parade of “me-too modeling toys” try to seduce you. But we chose an alternative approach to modeling …it’s called REALITY. Got all that? Now let’s try to recreate this process —sound and feel— leaving out everything except the preamp. Ouch! You can see why we almost gave up. We’re not exactly sure how it works or even how we did it …only that we were determined to stuff a Recto® Stack in a two-space rack. And we didn’t stop ‘til it was over the top.

DON’T SETTLE FOR LESS THAN THE MOST RECORDED AND REVERED AMPLIFIER IN CONTEMPORARY MUSIC. WHY NOT START WITH THE ORIGINAL?

And in fact, we used the exact same parts and circuitry making it killer for live too. Then we added extra recording tubes, six in total, five custom transformers, a gang of tuned inductors and our thirty years of tone-questing experience to duplicate on tape not just the sound—but the addictive feel of a Recto® stack mic’d up in a great room.

Now those sounds and more are instantly available—any time, anywhere at any volume level. Remember, only Mesa® makes the authentic Recto®. So next time you want to track, don’t get bogged down with hours of set up and miles of cable. Plug straight in to the Recto® Pre-Amp and get right to the heart of your playing—inspiration.

Channel One alone will amaze you. We’ve added the Fat and Brit modes from the mighty Road King® to create a truly powerful arsenal of clean and roots sounds. If you never used Channel Two’s amazing gain sounds, this Pre-Amp would be worth every dime just for it’s Channel One virtues alone. But trust us—there’s more, much more: Raw, Vintage and Modern roam gracefully through all the realms of subtle gain expression before reaching a mind-bending fury of high-gain Recto performance. 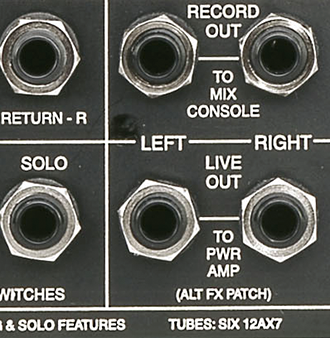 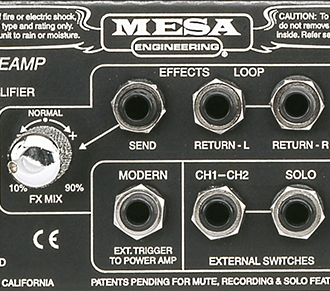 Stereo Recording Outputs capture the sound and feel of a Recto stack mic’ed up in a great room. Three years of R&D went into the circuits behind these jacks! Stereo Live Outputs deliver a great live experience when coupled to any Mesa power amp.

A Parallel Effects Loop with Left/Right Returns and a Mix Control provides seamless stereo processing. The External Switch Jacks allow remote switching control to the two channels and the Solo feature via any latching tip-to-ground switch or controller. An External Trigger port is also provided to activate the Modern mode in Rectifier Stereo Power Amp (or any Smart Power™ function on any Mesa Power Amp) to deliver fully authentic Recto mayhem.