I happened to get one of these early before the custom tolex amps are really out. You won’t find another in purple without a wait.

Amp is brand new and will ship in original box with paperwork etc. No offers on this one.

Ships for free in the US(lower 48 only)

Soldano’s SLO-30 Super Lead Overdrive packs the fabled SLO-100’s tone and features into a studio-friendly, 30-watt package. Far more than a mere high-gain tube amplifier head (although it excels at that), this fire-breather’s cascading-gain preamp design churns out a thick, juicy sizzle that lends itself to everything from whiskey-soaked electric blues to red-hot jazz fusion to tooth-rattling metal. What’s more, the Super Lead Overdrive’s dynamic sensitivity is on a par with any boutique-voiced amp that dares to challenge it. There’s plenty of tone-shaping onboard this 30-watt, 2-channel amp head, plus independent preamp gain and master volume controls for achieving harmonic saturation at bedroom-friendly sound levels. You also get a tube-buffered effects loop for your pedals, while a variable slave output enables effortless DI-ing. Beyond that, a rotary impedance selector allows you to pair the SLO-30 with a multitude of speaker cabinets. Soldano’s Super Lead Overdrive is built from top-shelf, military-grade components for the ultimate in durability. Countless world-class guitarists swear by the Super Lead Overdrive. Now, thanks to the SLO-30, you can experience that sound for yourself. And you can do it without violating noise ordinances.

The Super Lead Overdrive is renowned for its rich, harmonically saturated gain and super-responsive touch dynamics, and it was everywhere in the late 1980s and early 1990s — Eddie Van Halen on For Unlawful Carnal Knowledge, Journeyman-era Eric Clapton, and just about everything Mark Knopfler has done since 1987 are but a few examples. In fact, a complete list of SLO users reads like a who’s who of world-famous guitarists — Lou Reed, Vivian Campbell, George Lynch, Gary Moore, Joe Satriani, Steve Vai, and a number of guitarists here at Sweetwater — the list goes on and on. And how does the SLO achieve this glorious sound? It all starts with four cascading stages of 12AX7-driven preamp gain. Your signal then travels through a tone stack that’s derived from a modified American-style amp. Finally, a 30-watt, 6L6-fueled output section delivers classic SLO tone at levels that won’t peel paint. If you’ve never experienced Soldano’s Super Lead Overdrive, plug in — you’ll never look back! 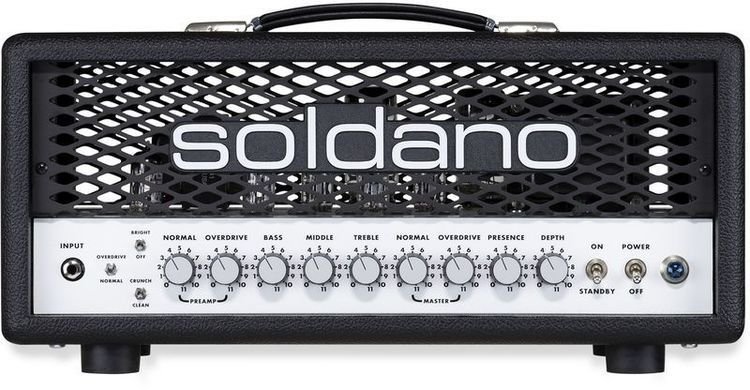 No matter what kind of tone you’re trying to dial in — rock, metal, contemporary blues — the Soldano SLO-30 can achieve it. This tube amplifier head’s Normal channel yields crystalline cleans that can be honed to a razor’s edge with the channel’s Bright switch or drug through the dirt with its Crunch switch. The SLO-30’s Overdrive channel delivers a super-thick sound that’s framed by a scorching, high-octane sizzle. Back off the gain and you’ll experience an inspiring blues-tinged sound with unbelievable touch sensitivity. Crank up the gain and you’ll unleash absolute brutality. Both channels share Bass, Middle, Treble, Presence, and Depth controls that supply loads of tone-shaping power. And a footswitch is provided for effortless, noise-free switching between channels.

The SLO-30 is jam-packed with the same pro-level features as its bigger brother. Its tube-buffered effects loop enables you to use it with your favorite effects pedals. Its slave control is an adjustable low-level output taken from the amp’s output transformer that enables you to route your signal straight to a PA or recording rig. Pro tip: this isn’t a load box — make sure you have a speaker or dummy load plugged into the amp while you’re DI-ing! The SLO-30 also boasts a rotary Impedance selector switch that accommodates 4-, 8-, or 16-ohm speaker cabinets. 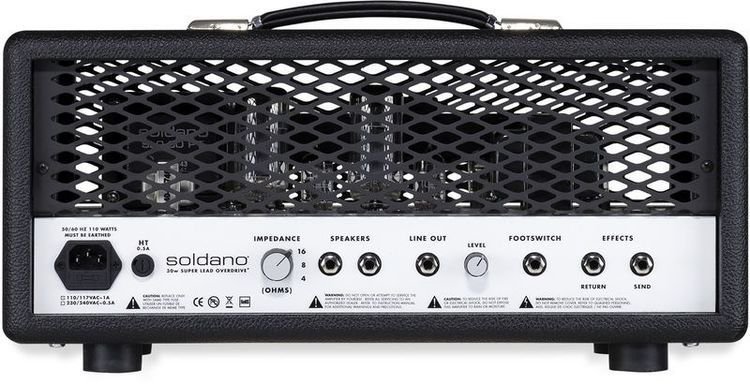