2011 Jackson PC1 Splatter Guitar Only One Made in Red Hand Painted by Phil Collen. The only PC1 Spatter ever done in red. Mint, collector’s condition with tags, etc and original case also in perfect condition.

2011 Jackson PC1 Splatter Guitar Only One Made in Red Hand Painted by Phil Collen. I would say that these guitars are hard to find, but that would be a massive understatement. Not only that, this particular guitar you will NEVER find because it was the only one ever done in red!

Everyone knows about the initial 30 guitars that were done by Jackson and Phil Collen. All those were done in black and have become quite famous due to things like this:

So after the initial run of 30 guitars that Phil painted in black, two more were commissioned; one in white and one in red. You are looking at the only one ever done in red. It was commissioned by a heavy duty collector and has sat in his collection ever since. It is one of a kind.
Again, it is in mint collector’s grade condition probably never even having been out of the house until now.
If you are reading this you no doubt know the history of these guitars and how hard they are to get a hold of. There has not been a black one for sale in years and probably won’t be. This one has never been for sale before. If you have ever wanted one, now is your chance.
The PC1 Splatters have become so legendary that Phil has even recently done sneaker to match them: 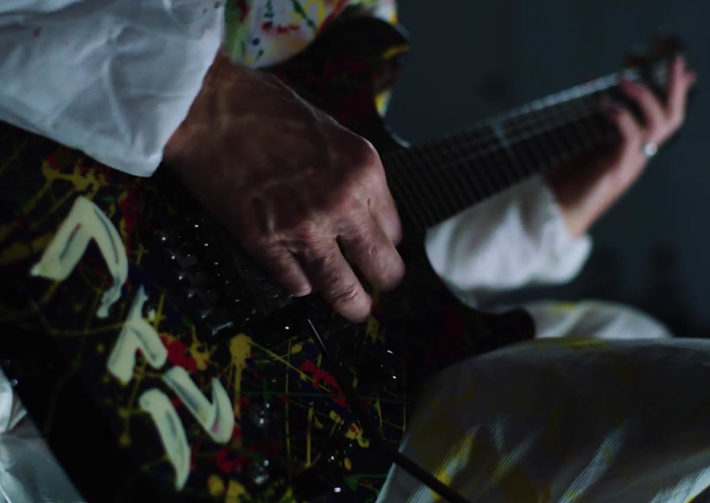 Combining his interest in distinct footwear with his passion for art, Collen has now teamed up with the Vancouver-based Six Hundred Four shoe company to produce a limited run of “Electric Splatter” sneakers.

Only 30 pairs of the shoes were produced — each of them custom hand-painted, numbered and signed by Collen, who can be seen working on them in the video below. As pointed out in a press release, his design was inspired by his “other artistic love,” namely Jackson Pollock’s style of painting; it’s a fondness that will be familiar to fans who’ve seen or purchased one of Collen’s limited-edition Jackson Splatter Guitar.

Collen’s partnership with Six Hundred Four was struck after the guitarist happened to pay a visit to the company’s Vancouver storefront while he was in town for a Def Leppard show. Intrigued by their approach to showcasing their wares with displays that felt “more like an art gallery than a shoe store,” he was inspired to try his hand at shoe art after speaking with Six Hundred Four founder James Lepp and hooking up with sneaker artist Zac Vine.

“I would have never thought that in less than 24 hours after walking into the Six Hundred Four store in Vancouver that I’d be splashing paint on a pair of really cool sneakers,” said Collen. “Def Leppard was playing the Rogers Arena in Vancouver that night so time was of the essence. Creating live art on a pair of sneakers turned out to be an explosive and exciting combination.”

“We have one simple principle at Six Hundred Four: Shoes can be shoes or they can be a storytelling piece of art. Thanks to Phil, I’m pretty sure we checked off as many boxes as humanly possible with this project,” added Lepp. “I couldn’t be happier with how everything turned out.”

Collen’s “Electric Splatter” shoes, which are selling for $500 a pair, are expected to ship Aug. 28 and are available to pre-order now.