This is a rare guitar that has not been made since 2006. If you are reading this, you know how cool and hard to find they are.

Excellent condition, no issues, comes complete as pictured with original Ibanez deluxe case, and of course, the infamous U-bar!

Grab this while you can, I do not expect to see another one any time soon.

The K7, also seen as the K-7, is a solid body guitar model introduced by Ibanez in 2001. It was the signature model of guitarists James “Munky” Shaffer and Brian “Head” Welch of the American band Korn, introduced in 2001. It is the first model of the K series.

Basically a 7-string RG series model, several modifications were made up by Munky and Head, including a mahogany wood body, custom DiMarzio pickups (PAF 7) with simplified controls and their signature U-bar. They also came factory tuned to Korn’s signature tuning: A, D, G, C, F, A, D (low to high).

After Head parted ways with Korn in 2005, Ibanez replaced the K7 series with the new APEX series in 2007. These are linked to Munky only, however K7’s can still be seen played by Munky and Head in several situations. The K720th was introduced in 2020 to commemorate the 20th anniversary of this model.

The U-bar is an alternative for the standard tremolo arm. It lets you palm the bridge to get tremolo effects without touching the fine tuners. The K7 models came with a specially modified Lo-Pro Edge 7 tremolo to accommodate the U-bar but also came with a standard arm for traditional set-up. 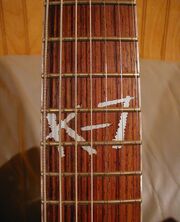